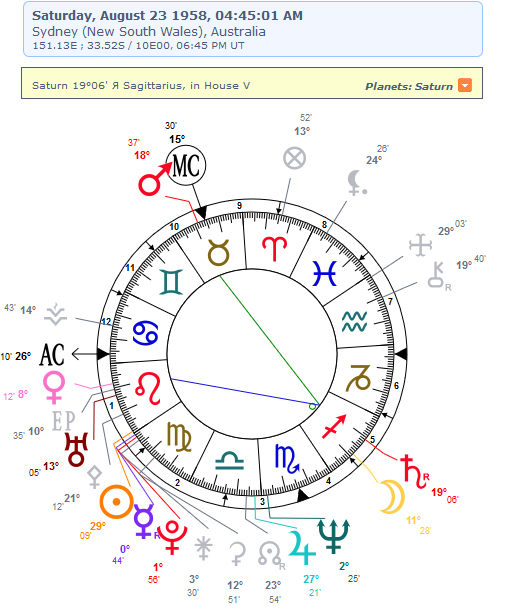 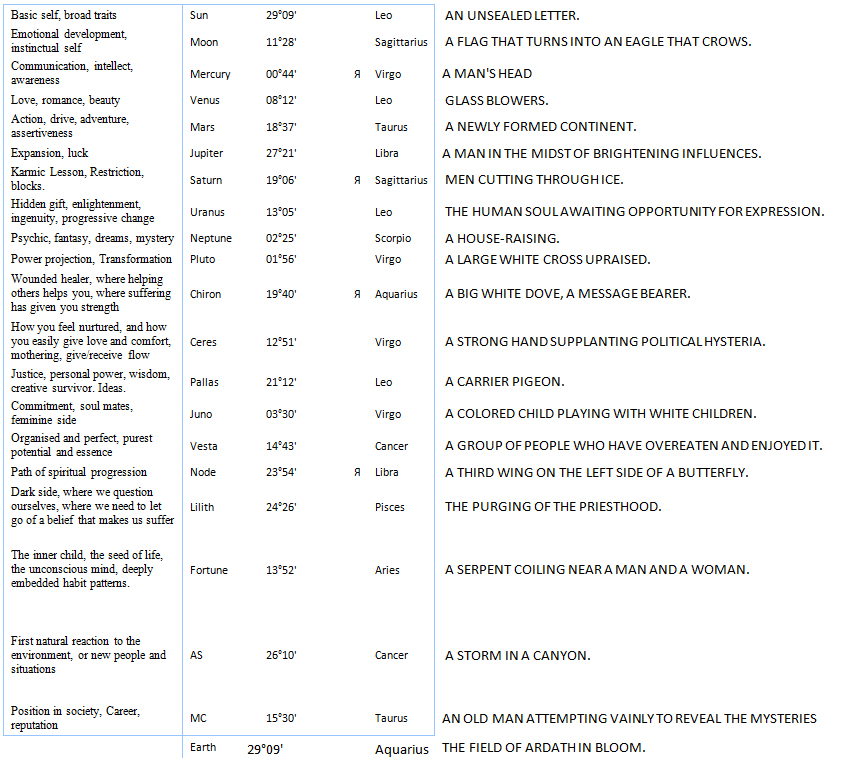 Saturn 19 Sagittarius Men Cutting through Ice (5th house) - Childhood (5th house) for my friend (Sun in Leo) he describes as cold, his father (Saturn) an ice man, showing very little love, his family home physically and emotionally “cold”. (His Saturn conjuncts his natal Moon) His parents relationship one of mental, emotional and physical abuse which transferred to their children especially the females in the family, his mother and eldest sister.


During this period he discovered surfing and the freedom it gave him to express himself away from the watchful eye of his father. He preferred winter waves as he found the hot summer sun oppressive and unforgiving. (much like his father). As his parents migrated from England in the 50’s, genetically his skin tone was fair and his hair red. (Mars 18 Taurus…A Newly Formed Continent)…Genetically his ancestors were used to cold climates. (Mars quincunx Saturn).
This childhood springboard thrust him into teenage years of motor vehicle accidents, assaults and a lack of motivation for achievement orientated careers. His creative spirit had been ‘frozen’ therefore leaving him directionless. Drugs and alcohol became a part of his leisure lifestyle, which allowed him to experience laughter and joy.


Moon 12 Sagittarius (5th house) - A flag that turns into an eagle that crows.
During his teenage years his mother (Moon) left the marriage over night with his 3 younger siblings. His family flag, now needed to be transformed into an eagle of spirit. With no family flag to fly, the hero’s journey of spirit now could begin. Neptune during this period crossing his natal moon. (the disillusion of his family flag).
After this he attached to another families flag as the newly formed continent (10th house) was still in the process of formation. His first wife’s Sun at 20 Sagittarius conjunct his Saturn.


When Pluto transited across his IC - Scorpio 15 (A girl’s face breaking into a smile) he had bi-lateral exotosis removed (surfers ear),subsequently they were packed for 6 weeks. Unable to hear anything for this period and being off work, he took to reading (Cancer 26 - Contentment and happiness in luxury, people reading on davenports) but the (Cancer 27- Storm in a Canyon) was about to arrive.
He was anything but happy, content, or in luxury so unless his body failed him (1st house) he was never going to stop long enough to listen (3rd house) to his soul trying to communicate to him. His Uranus Leo 13 - (The human soul awaiting opportunity for expression) (1st house). This was that opportunity.


Childhood had been emotionally unsafe for him to venture into his more intuitive side.
Pushed to achieve, and emotional expression not encouraged, drove this side of his nature underground. North Node square the ascendent.
North Node in Libra 23 - A Third wing on the left side of a Butterfly - he had developed a very lopsided view of the immediate environment around him (3rd house).
During reading he discovered another way of relating to the world around him, a more intuitive way. A world totally alien to his upbringing and thought processes in the 60’s - 70’s.
God, spirituality and shamans were not part of his normal (3rd house) everyday thought processes. N.N conjunct Jupiter conjunct Neptune square the ascendent.
Jupiter 27 - A man in the midst of brightening influences….After reading more esoteric intuitive books he then seeked out these experiences more and more. These experiences left him feeling expanded, giving him a sense of outer body transcendence, freedom from his limited superficial view of the world.
Neptune 2 Scorpio - (3rd house) A House Raising - as this conjuncts Jupiter - during this period he looked to god for assistance (his higher self)
He read a book on Krishna which inspired him to live 7 years according to the principals of Prabhupada the initial founder of the Hare Krishna movement.
The sense of community appealing to his sensitive nature at this time. Competition and achievement - which his father had drummed into him, slowly drowning out…He was able to listen to a different beat. Music tastes changed, food became vegetarian, and healing was studied. All these aspects of intuitive life and a more female approach to his everyday existence. (3rd house).


This period ended in divorce, child maintenance and near bankruptcy. He needed to review his karmic story. (Saturn)
Love, joy and laughter were missing from his life. He had to start cutting through the ice.
Venus 8 Leo - Glass Blowers - Heat, Creation, Expansion, Spinning, Turning, Pliable, In a process of formation, shapeshifting
In the process of perfection of the physical body (the vessel) to carry the new vibration from the soul (Uranus 13 Leo conjunction).
Yoga for him had been a way of transforming the very hard physical and emotional patterns developed most likely for lifetimes. His genetic heritage was one of English army men and war strategies. His maternal side though, as his mother described it, “an idyllic existence in the English country side, dancing as children around Stonehenge”. These to very different energies at war within himself. The only means of peace (Chiron - 20 Aquarius, in the 7th house - A big white dove, a message bearer) squares (Uranus - 13 Leo - The Human Soul awaiting opportunity for expression), was obtained through his paternal side, aggression and war. Change in this clan (Mars - 18 Taurus - A Newly Formed Continent) meant forcibly attaining it.

He had to change his behaviour, towards a more intuitive approach to life, if he was going to alter his conditioning and be able to build a new life. The quincunx from Saturn in the 5th house of expression to mars in the 10th, was indicating that this was going to be a slow painful process.
Over the following 15 years, step by step he began to build his new continent and transform his thought and karmic patterns.
He began to express his more female side and life began to change for the better, allowing his IC (A Girl’s face breaking into a smile) to appear, and his Midheaven direction to be not around secret army tactics but a genuine interest in the Ancient mysteries. (Taurus 15 -An old man attempting to reveal the mysteries).
(Mercury in Virgo 0- A Man’s Head (1st house conjunct Sun and Pluto).


His life had been one of personal (1st house) transformation (Sun conjunct Pluto and Mercury). The Plutonic influence on his sun (Pluto 01 - A large white cross upraised) often left him feeling crucified by his siblings (3rd). (Neptune 2 Scorpio - A house Raising sextile Sun) his identity often misinterpreted as confrontational and a unwelcome whistle blower. The core idealism being one of respect of others, of which his father had none. He was breaking old karmic ways of being a silent witness "a block of ice" to abuse in parental and marital relationships. "A Mans Head" very indicative of think before you act.

And through it all, there is a common thread of communication in his journey: 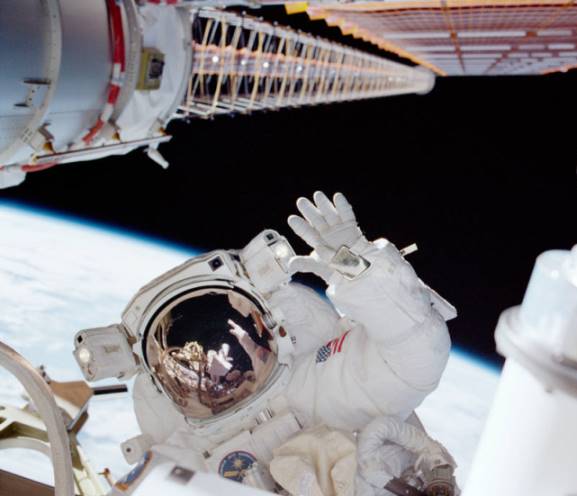